Take Risks and be Inspired to Survive in this Pitch-Black Tabletop RPG, now in it's Second Edition!

"... the adventure itself is an amazing entry point into the world of Dark Peaks .... For an introductory adventure, Festival of Swords hits all of it’s marks."   Roll4Network.com "... if you are a fan of OSR-style brutal dungeon hacks you’ll likely get a kick out of The Festival of Swords ... " Australian Table Top Gaming Network

"They had told you that you'd be armed and armoured for war. But now, clad in rusty plate with a broken sword to your name, it feels deeply inadequate against the creatures in the night you can hear gathering ahead of you. The noise of them running, chittering, braying to their low voices stills your heart as you step into the gloom, braced for every step to be your last. Perhaps this really was a mistake, and you should have stayed at home on your fields. But it's too late for that now..."

THE DARK PEAKS: FESTIVAL OF SWORDS is an introductory adventure within the Dark Peaks setting and the Dark Peaks Gaming System (DPGS).  Now, with its second edition, it has been honed and improved by player feedback!

The Dweller has risen. Deep beneath the darkness of Deepmaw Fell, this malevolent entity is gaining power from its cavern at the mountain's base. As evil rises, heroes must rise to face it. The Festival of Swords has been announced, and anyone who attends will receive weapons and armour to fight with. Be they commoner, knight, peasant or king, all are welcome to join the campaign against the Dweller. Will you answer the call?

The rules within The Festival of Swords includes:

Within this starter book you will find a full adventure, where brave commonfolk will make their first venture into the Deep of the Fallen Floor. This adventure is designed to fill a single session of play, to give an focused flavour and experience of this game system.

This 36 page book includes a full-colour dungeon map and Game Master guidance for every location The aim of this adventure is to rescue a out-of-their depth boy, but such bravery may come at a lethal price. For in the gloom beneath Deep Maw, hostile creatures await. Dusklings, Taurs, Roguish humans and the nature of the dungeon itself will test them to their very limits. The Mountain of Deep Maw is brutal to those who are cowardly and unlucky.

Will your brave commonfolk survive, or will they join the corpses and bones which already litter the darkness?  Find out inside!

This book is the first publication for The Dark Peaks series, an independently produced TTRPG with no publisher support. Any and all support we is coming from you, the fans. Tell us what you think in the comments below! 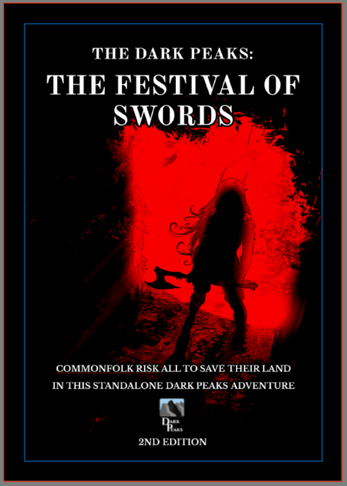